In addition to data from the Levada Center, the text includes data from a Pew Research Center survey conducted in the summer of 2020 in 14 countries.

About 70% of Russians, when asked about their religious affiliation, identify themselves as Orthodox Christians. For 40% of Russians, religion plays a very important or fairly important role in their lives-the latest data is almost exactly the same as last February’s measurement:

What role does religion play in your life? (as a % of the respondents)

If we compare this with data from surveys conducted in 14 developed countries and rank them according to the proportion of the population who chose the positions “very important” and “quite important,” it appears that the Russians are close to the residents of Great Britain and Australia and are approximately in the middle of the list. In the United States, for example, the situation is quite different – one in two Americans assigns a very important role to religion in their lives. At the end of this “religiosity ranking” are Japan and the Scandinavian countries. 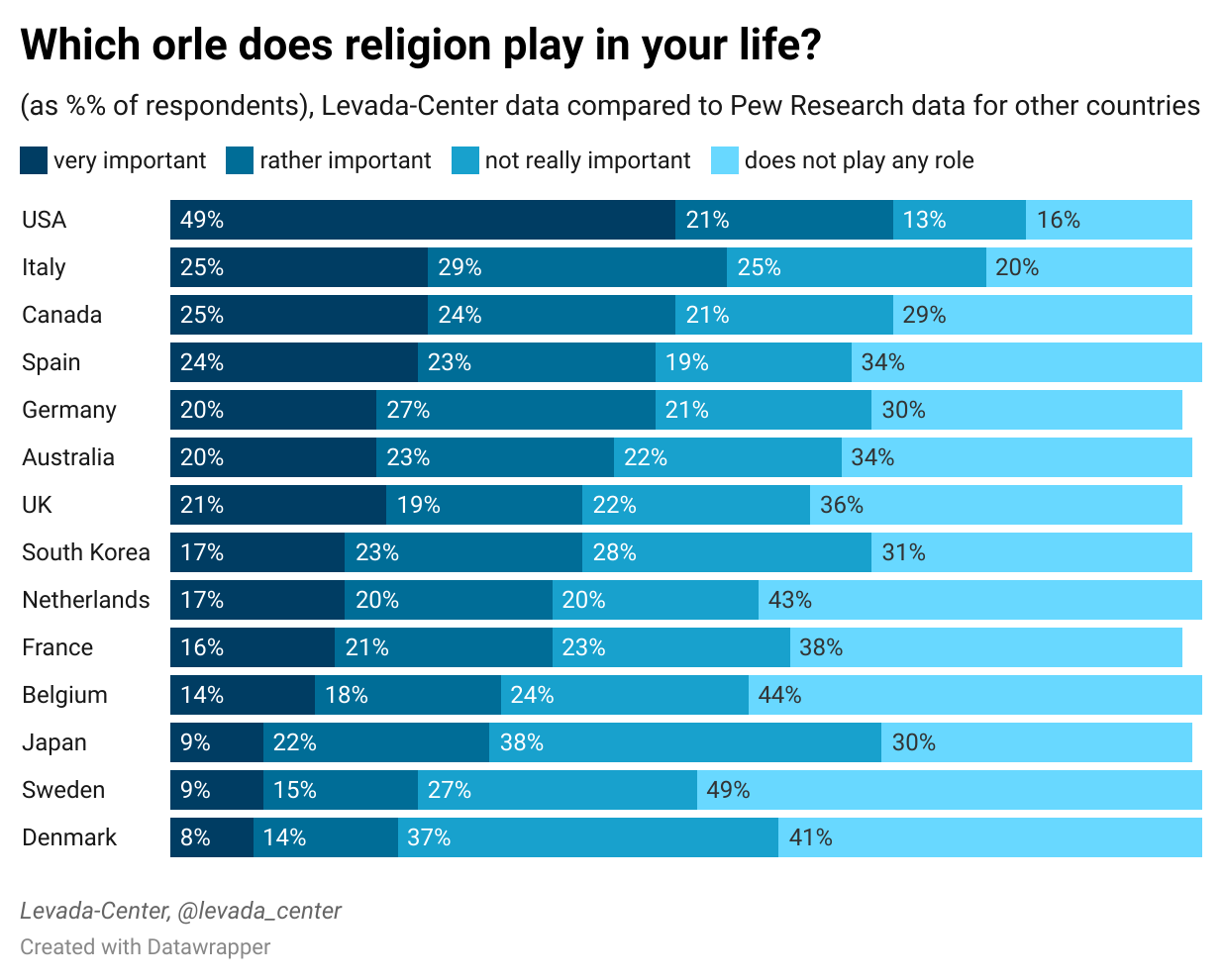 Women are more religious than men. This specificity can also be seen in some other issues related to religiosity – for example, a higher proportion of women identify themselves as Orthodox, and women are more likely to attend religious services. Overall, according to the Pew Research Center study, this gender difference is common among Christians in other countries as well. 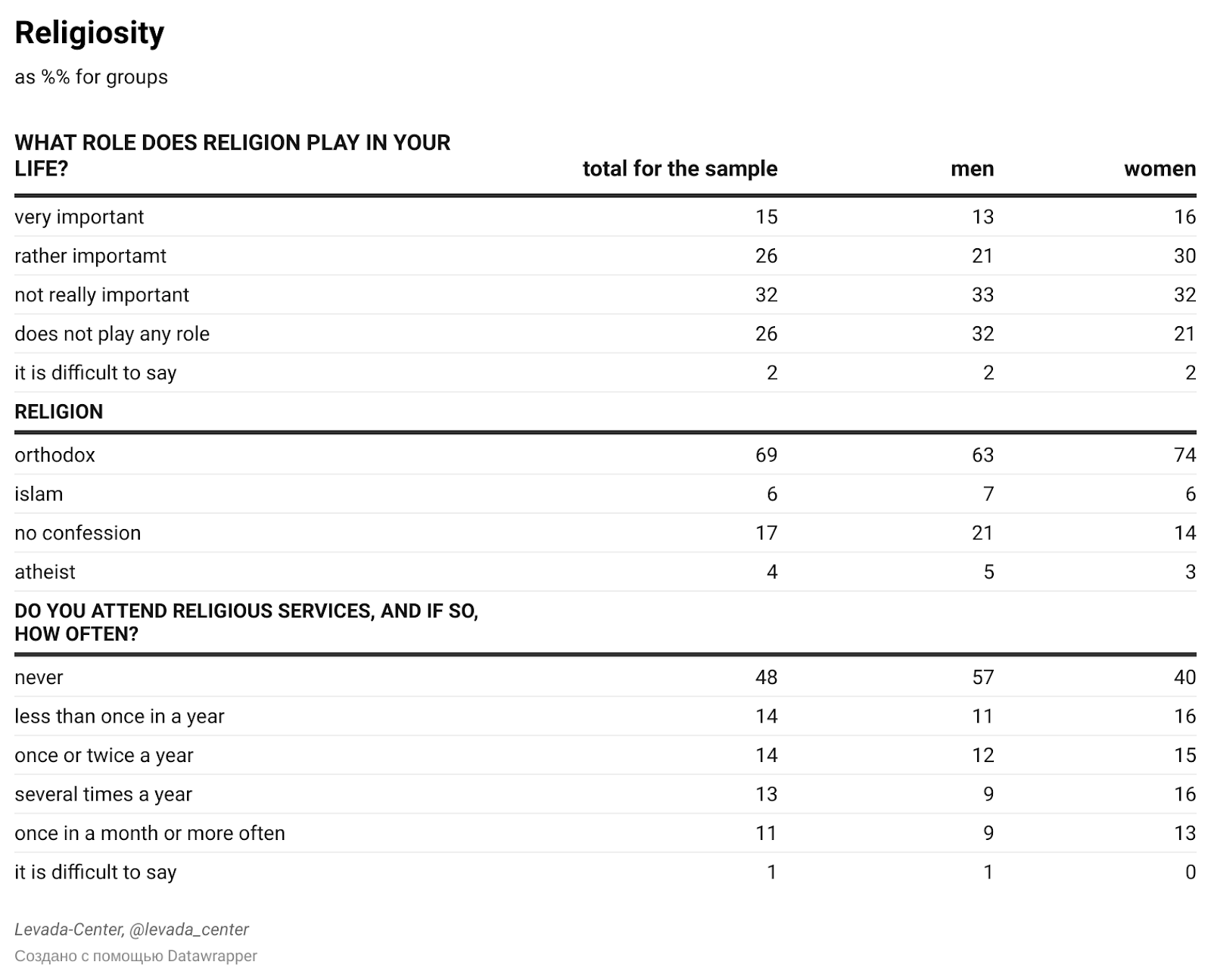 Since turning to religion can be seen as a way to overcome anxiety and stress in crisis situations, respondents were asked whether the coronavirus epidemic had affected their religious faith. Eight percent responded that their faith had been strengthened; for 88 percent of those surveyed, the situation had had no impact on their faith.

Similar to the data on the role of religion, the United States had a significantly higher proportion of respondents who said their faith was strengthened (28%), while Russia is close to European countries such as the Netherlands and Belgium. 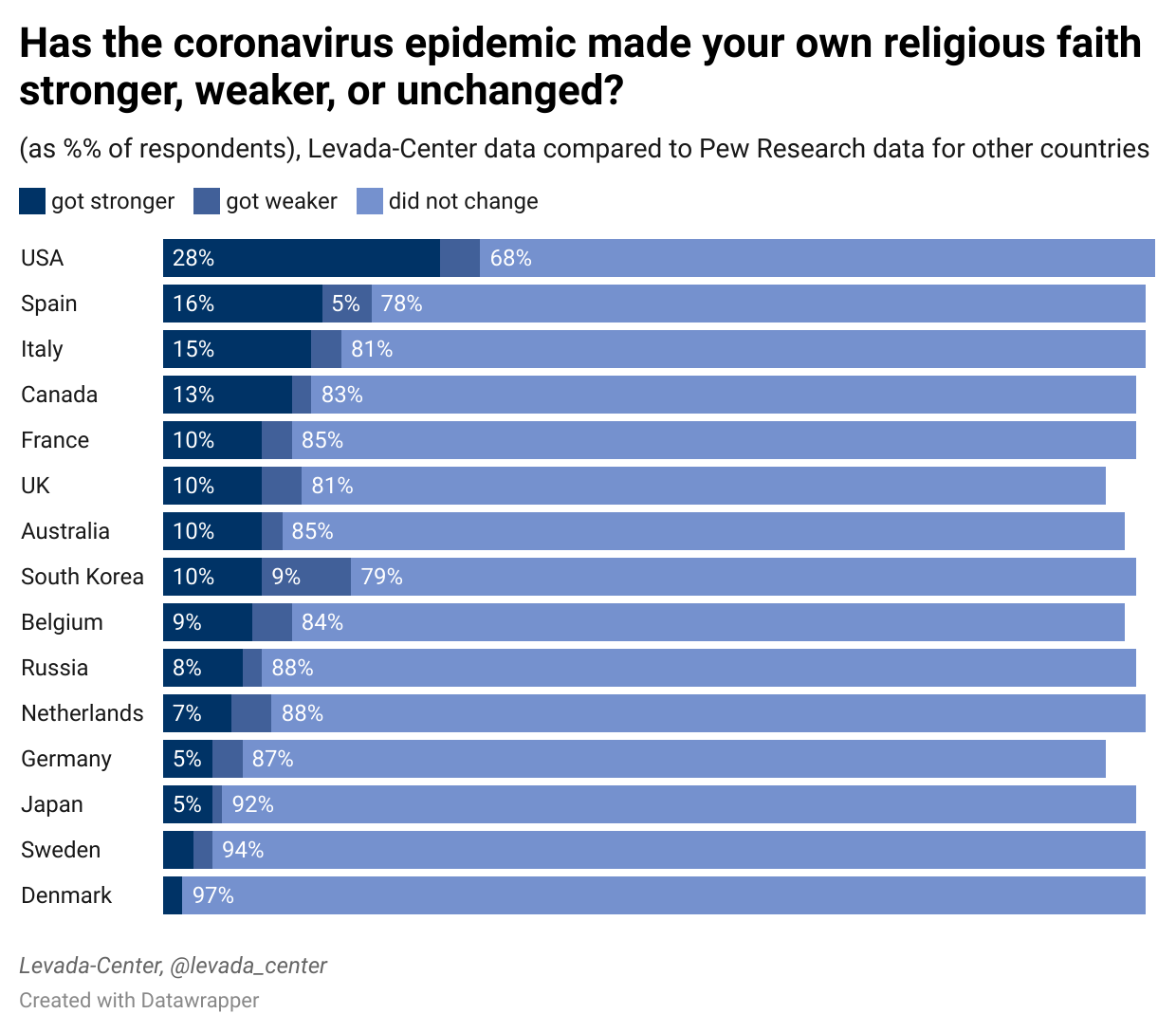 Residents of Russia, in whose life religion plays a very important role, were more likely to say that their faith had strengthened because of the epidemic (27%), as was also the case in the other countries surveyed. 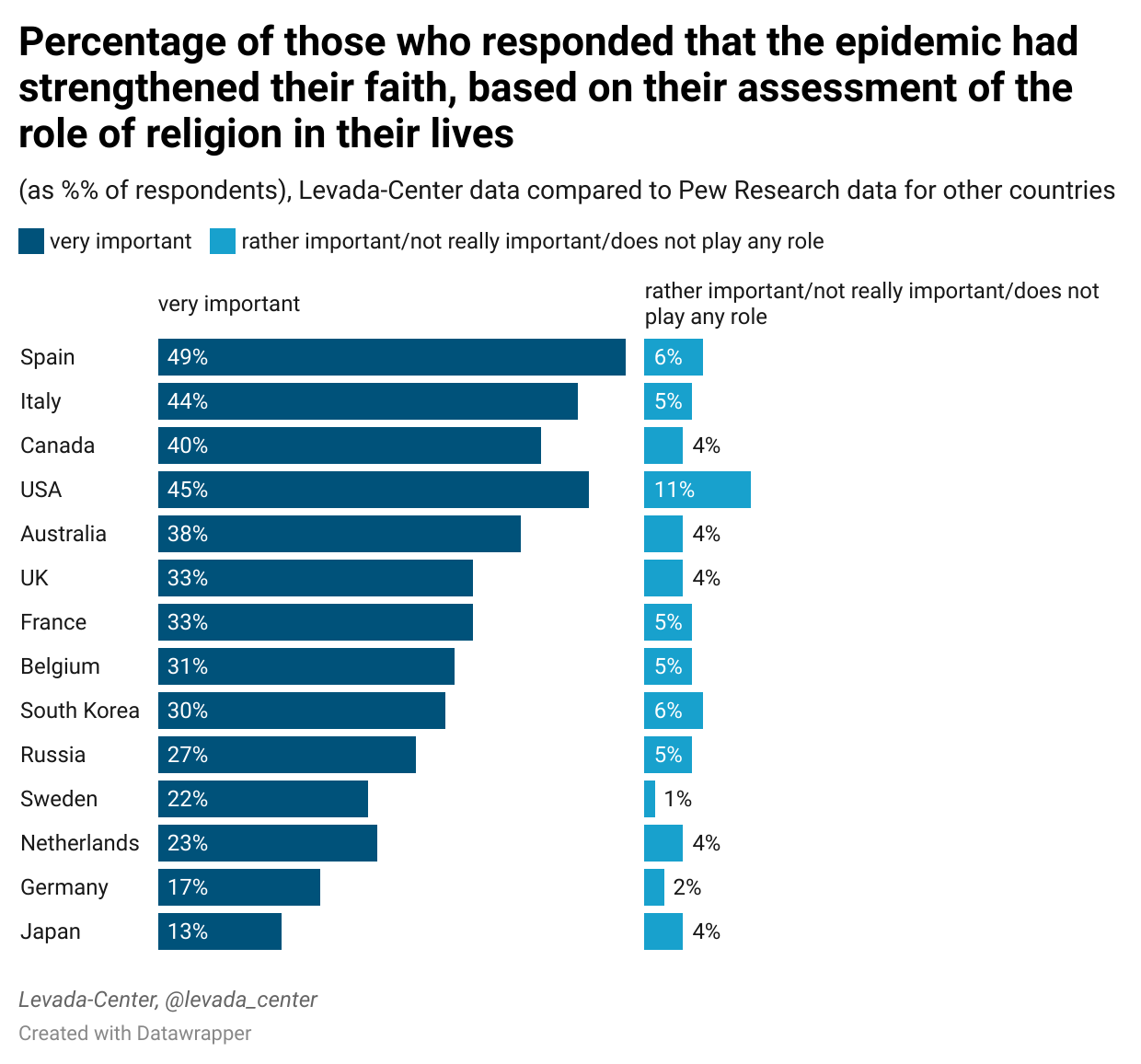 In Russia, the proportion of those who believe that the epidemic has had an effect on the faith of the country’s population as a whole is greater than the proportion who stated such an effect on their own religiosity (60%). However, in the opinion of 11%, it is not a question of strengthening, but rather of weakening the religious faith of those around them. It is possible that this attitude is related to the perception of a number of restrictive measures, including those concerning religious life, which were imposed during the pandemic (for example, the temporary closure of churches to parishioners). 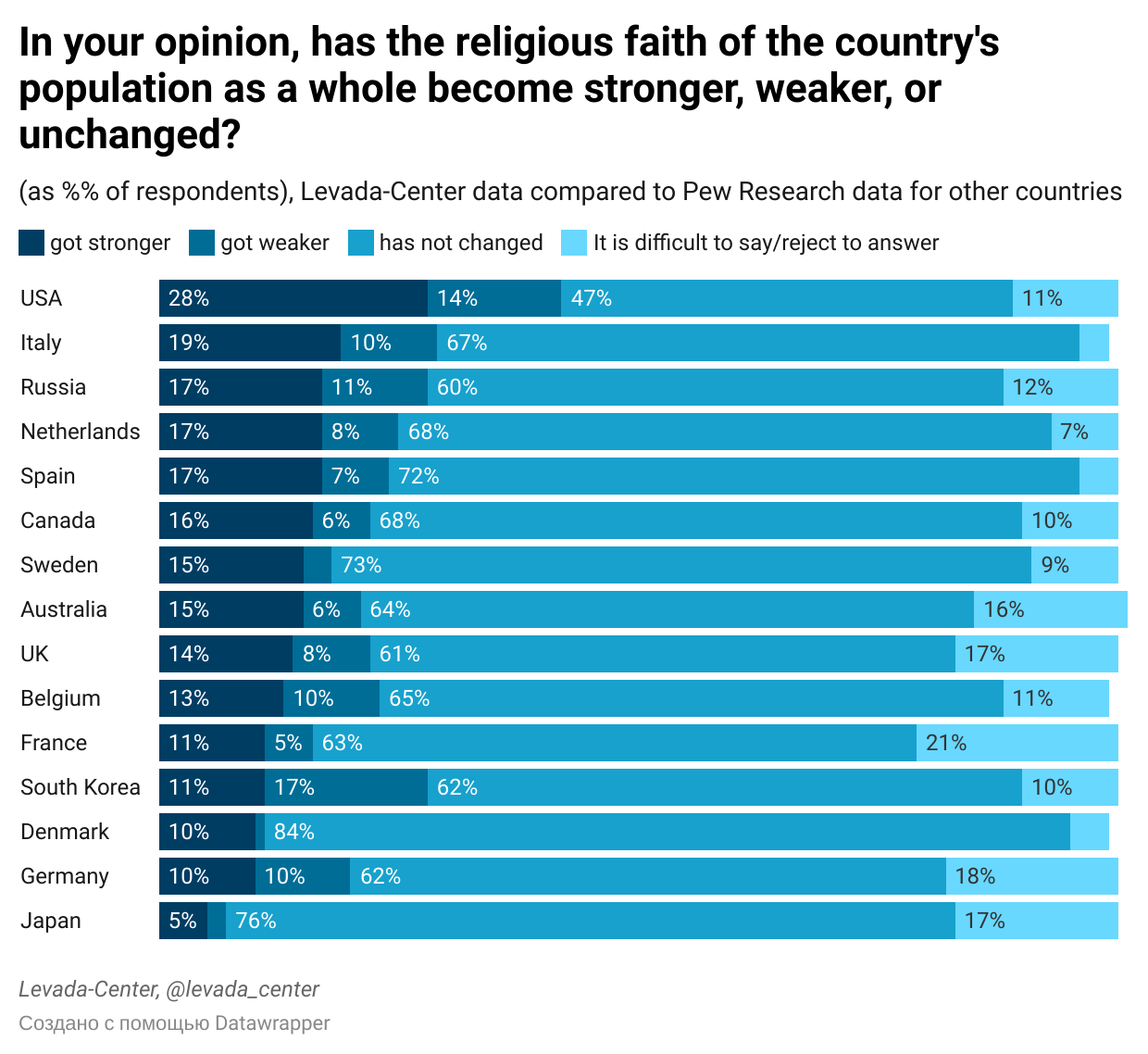 The ANO Levada Center has been included in the registry of non-commercial organizations acting as foreign agents. Read the Director of the Levada Center’s statement of disagreement with this decision here [1].