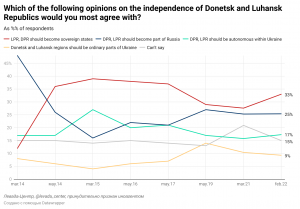 Against the background of the escalation around Donbass, the share of those who treat Ukraine badly has grown: if 43% of respondents treated Ukraine badly in November last year, then in February this year – 52%. 60% of respondents consider the United States and NATO countries to be the initiators of the escalation in eastern Ukraine. 33% of respondents believe that the DPR and the LPR should become independent states, 25% believe that they should become part of Russia. The survey was conducted on February 17-21.

Against the background of the aggravation of the foreign policy conflict around Donbass, the attitude of Russians towards Ukraine has worsened. If in November 2021 45% of Russians treated Ukraine well, and 43% – badly, then in February 2022 these figures were 35% and 52%, respectively.

44% of Russians closely follow the latest events in Ukraine: 20% – very carefully, 24% – quite carefully. Without much attention, 38% of respondents follow what is happening, 14% do not follow at all.

During the survey, 45% of respondents considered it likely that tensions in eastern Ukraine could turn into a war between Russia and Ukraine; 36% assessed the possibility of war as unlikely, 13% completely ruled out this possibility.  In December 2021, 39% (6 percentage points less than in February 2022) considered a war between Ukraine and Russia likely.

Compared to March 2021, the share of supporters of the independence of the people’s republics increased by 5 percentage points.

The survey by the Levada Center was conducted January 17 – February 23, among a representative sample of all Russian urban and rural residents. The sample was comprised of 1618 people aged 18 or older in 137 municipalities of 50 regions of the Russian Federation. The survey was conducted as a personal interview in respondents’ homes. The answer distribution is presented as percentages of the total number of participants along with data from previous surveys.