RUSSIANS’ UNDERSTANDING OF A “NORMAL LIFE”

The idea of a “norm” is an important element of research on public sentiments. It allows for different opinions to be considered along the continuum “agreement” (obligation) – “disagreement” (refusal), i.e. as “conformist,” “oppositional,” “radical,” “loyal,” etc. Especially noteworthy are ethical norms, which implicitly govern and morally justify human behavior (as opposed to institutional norms, wherein deviating from obligations and commonly-accepted behavior leads to punishment and sanctions). These implicit norms are connected to the notion of “normality” and, in this text, of what it is to “live normally.” This survey did not specify which area of life was being referred to; the goal of this question is to analyze loyalty to a collective way of life (essentially people’s satisfaction with what the majority of people around have) or a preference for another normative social order that implies a “better life.” We have previously surveyed people on separate aspects of “normality” (i.e. desired consumer behavior: “For which family necesseties should a family like yours have enough money to live normally?”).

The Levada Center has thrice presented this question and the distribution of responses to the survey did not change (see. Table 1.) Public opinion is virtually evenly split: in December 2019 45% thought that “living normally” meant “living the same way as the majority of people around”; 51% of respondents were of the opinion that “living normally” means “living better than the majority of people around.”

Table 1. THERE ARE DIFFERENT IDEAS OF WHAT IT MEANS TO “LIVE NORMALLY.” WITH WHICH OF THE FOLLOWING OPINIONS WOULD MOST AGREE WITH? (one answer; percentage by column)

* The form was for respondents to fill in individually. With the share of respondents who have difficulty answering is generally higher than in an interview situation.

It is interesting to observe which social and demographic groups prefer joining the majority and which, conversely, demonstrate greater requirements in their understanding of a “normal life.”

The demand for a better life is more evident among the younger age category of 18-24. Young respondents evince demands for a higher standard of life (“quality of life”), and other normative patterns, i.e. the need to orientate themselves to the majority, are less attractive and significant than among representatives of the older generation that is more conformist-minded.

While the shares of respondents who hold opposing views are virtually equal  among older Russians (47% and 48% in 2019), for the youngest age groups the share of “proponents” of a better life is significantly higher (58% and 40% respectively).

Figure 1. The relationship between the two views cut by age group
(the higher the value, the higher the support for the view “living normally is living about the same as the majority of people around”; 1 reflects a balance of opinions) 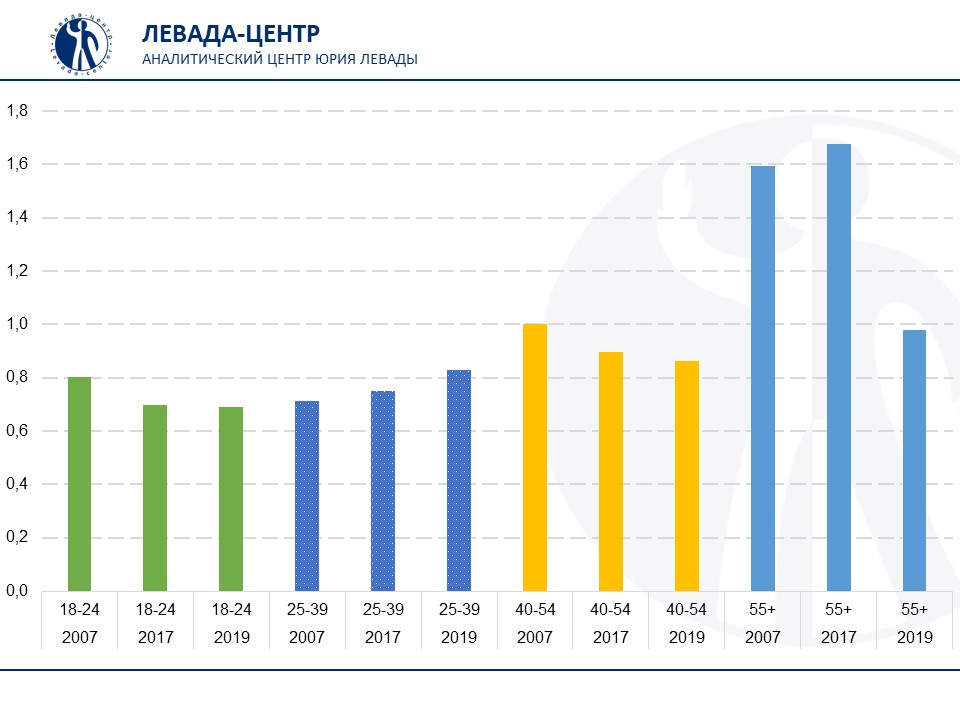 Holding a higher education does not differentiate these perceptions of a “normal life”: the difference between those respondents who have one and those who don’t is not statistically significant.[1]

Table 2. Distribution in relation to education (percentage according to the column)

Note that from 2007 to 2019 both subgroups and the population saw a general increase in the share of those who supported the opinion that a normal life is not the life that the majority live. Over 12 years the number of reasons for the population to join the majority and consider this “way of life” the norm has declined. This is partially supported by the trends in the integral indicator of public sentiment, the Public Moods Index (Indeks Sotsialnykh Nastroyeniy — ISN), the value of which reflected more optimism in 2007 than in 2019.[2]

We refer to the ISN to compare the opinions of the so-called “conformists” and proponents of a “better life” (with data from December 2019). Among the respondents who are inclined towards the majority and prefer to “live like everyone,” the ISN is higher, i.e. these respondents declare more optimistic ratings and expectations in economics, the political life of Russia, and personal financial well-being. On the other hand, among respondents who want to “live better than the majority of people around” these sentiments and expectations were more pessimistic (Figure 2).

Figure 2. The Public Mood Index (and its individual components) cut along the two groups with ideas about a “normal life,” December 2019 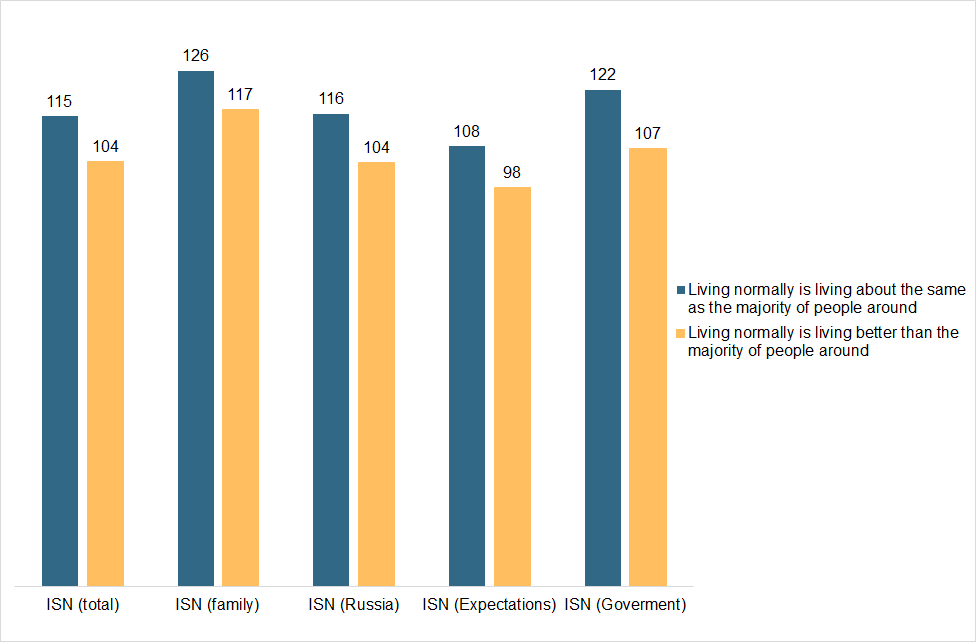 The largest difference (15 points) is in the values of one of the individual indicators of the ISN is the “Government Index”: Russian residents who consider the norm to be a “life like the people around them” more frequently declare approval of the president’s and government’s actions than those who aspire to “live better than the majority of people around” (Figure 2). They also give a more positive rating to the situation in Russia (another indicator of the ISN — the “Russia Index”, difference of 12 points).

Taking into account specifically the differences in the social and political components of the ISN, it is interesting to see whether there are differences in the level of declared readiness to vote in elections among respondents with different ideas of a “normal life.”[3]

The survey form included a question on readiness to vote in the upcoming elections to the State Duma (distributions of public preferences as a whole can be seen here). Despite the fact that the list of parties presented to respondents on the answer card included many positions, only those that had enough support to allow for separate analysis were selected.

The distribution of opinions among supporters of the three parties is virtually identical, while among respondents who would not participate in the State Duma elections the most popular opinion is “living normally is living better than the majority of people around” (58% vs 38%). It turns out that so-called “conformists” that consider the norm for life is aspiring to live like the majority of people around are more likely to declare their participation in possible elections than the so-called “non-conformists” who wish to “live better than people around them.” A large part of them would declare their abstention from participating in the elections.

The demand for a “better life” is growing among polar opposite (by level of urbanization and opportunity) types of population centers: Moscow and rural areas. This is especially noticeable in the distribution of opinions among Moscow residents, whose idea of a “normal” way of life has changed (Table 4). While in 2007 and 2017 the share of respondents who determined their ideas of a “normal life” by that of the majority was predominant, in 2019 the opinion that “living normally is living better than people around” became predominant. Among rural residents the changes are less extreme, but, now, the shares of respondents who hold opposing views are becoming more equal.

Table 4. Distribution of opinions cut by area of residence
(percentage according to column)

[1] Only respondents with a lower than average level of education differ. Among them the support for the view that “living normally is living about the same as the majority of people around” is more evident.

[2] All trends of the ISN among the populations a whole beginning in 2002 are available in the section “Indicators.”

[3] The results of this survey should not be considered indicators of participation in possible elections; they only attest to the party alignments of the respondents and their readiness (at survey time) to participate in such an event.