The survey was conducted between September 20–26, 2018 using a representative sample of Russian urban and rural populations of 1600 people from the age of 18 and over in 136 localities of 52 of the country’s regions.  The research was conducted in-house in the form of personal interviews with the respondents. The answer distribution is presented as percentages of the number of participants, together with the data from previous surveys.

Statistical error in the sample of 1600 people (with a probability of 0.95) does not exceed:

The results of the research into public opinion demonstrating the attitudes of residents of Ukraine to Russia belong to the Kyiv International Institute of Sociology (KIIS).

Monitoring Attitudes Towards the Neighbouring Country

The dynamics of perception of one another previously pointed to a more positive image of Russia among Ukrainians, than among Russians towards Ukraine.  Moreover, from the end of 2017, the opinions of Ukrainian society followed the trend of growth in positive relations to the neighbouring state.  Conversely, the negative attitudes of Russian residents towards Ukraine have been more consistent, and fluctuation in attitudes towards ‘the neighbour’ during this period are random and statistically insignificant.

The ‘Good Neighbourliness’ Index
(Calculated as the difference between positive and negative assessments + 100; the higher the index score, the more positive the attitude towards the neighbouring country) 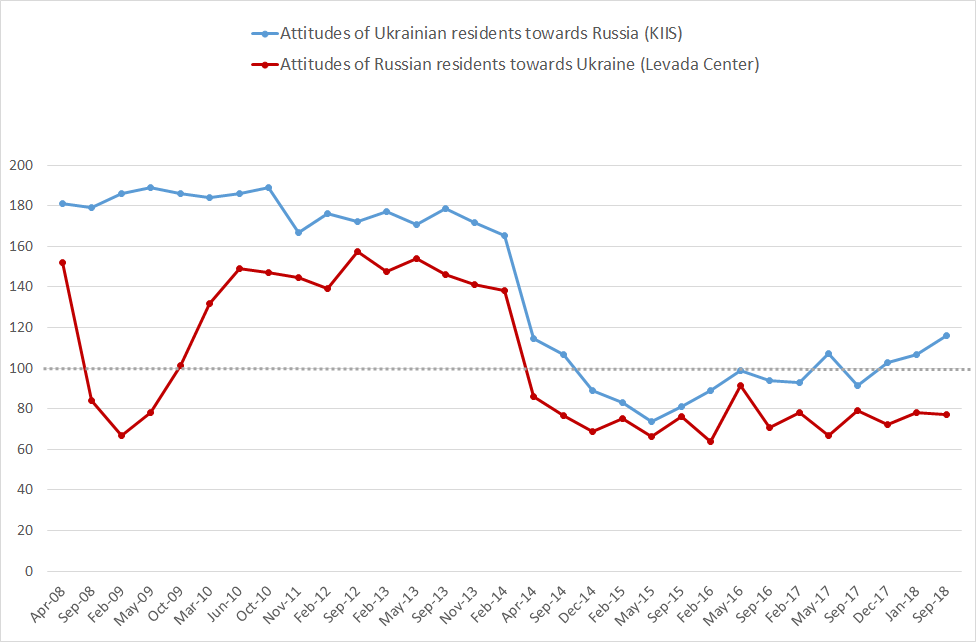 What is your current general attitude towards Ukraine? (Opinions of Russian residents – Levada Center Data)

What is your current general attitude towards Russia? (Opinions of Ukrainian residents – KIIS Data) WHICH OF THE FOLLOWING OPINIONS REGARDING RUSSIA’S RELATIONS WITH UKRAINE WOULD YOU MOST AGREE WITH? (Opinion of Russians residents – Levada Center Data)

HOW WOULD YOU LIKE TO SEE UKRAINE’S RELATIONSHIP WITH RUSSIA? (Opinion of Ukrainian residents – KIIS data)

ON THE QUALITY OF RELATIONS WITH ONE ANOTHER

In addition to regular questions regarding relations with the neighbouring country and borders from joint Levada-Center and KIIS monitoring, in September 2017 parallel questions were asked regarding representatives of the respondent’s own ethnic majority and the ethnic majority living in the neighbouring state, based on universal characteristics: Rational / impractical; peace-loving/ cruel; freedom-loving / downtrodden, etc.  Considering the continuing conflict between both countries, this question’s assessment of the ethnic majority was limited by territorial borders: in both countries, respondents were asked about ‘Russians’ who live in Russia, and about ‘Ukrainians’ living in Ukraine, excluding from the assessment ‘aliens’ living in the same state (‘Russians’ in Ukraine and ‘Ukrainians’ in Russia).

The Levada-Center earlier asked the question about qualities that allows us to trace how representations of ‘self’ and of the ‘other’ have changed or, on the contrary, remained the same throughout the last four years.  The frequency of choosing [positive] qualities, characterising ‘Russian’ people amongst Russian residents increased, i.e. respondents became more willing to attribute (mostly positive) characteristics to ‘one’s own’: ‘hospitable’, ‘cultural’, ‘peace-loving’, ‘hopeful’, ‘open’, ‘tolerant’, ‘energetic’.  This is partly, in our opinion, the consequence of the 2014-2016 social consolidation which solidified national awareness and thinking about ‘who we are’.  The frequency of qualities attributed to ‘Ukrainians’ remained the same, as did the distribution of characteristics regarding them in general

IN YOUR OPINION, WHICH OF THE FOLLOWING QUALITIES MOST CHARACTERISES UKRAINIANS (RESIDENTS OF UKRAINE)? (Levada-Center Data; respondents were given a card with a list of qualities and could choose more than one response; the qualities were ordered alphabetically)

IN YOUR OPINION, WHICH OF THE LISTED QUALITIES MOST CHARACTERISES RUSSIANS (RESIDENTS OF RUSSIA)? (Levada-Center Data; respondents were given a card with a list of qualities and could choose more than one response; the qualities were ordered alphabetically)

Turning to the comparison of how Russian residents and Ukrainian residents perceive ‘their own’ and the ‘other’ ethnic group, we can make a number of observations: Firstly, there is a higher intensity among Russian residents regarding the image of ‘one’s own’ (‘Russians’) than regarding ‘others’ (‘Ukrainians’).  Secondly, the more expressive (positive) assessments of ‘one’s own’ [among Russians] differs from Ukrainians residents who named qualities with a lesser degree of intensity characterising, in their opinion, ‘Ukrainians’.  Thus, if the ratio of positive or negative qualities from Russia regarding ‘Russians’ is 9:1, amongst respondents from Ukraine regarding ‘Ukrainians’ it is 8:1.   At the same time, negative characteristics of ‘the neighbour’ are in general attributed (in total) three times more often than to ‘one’s own’ in both countries.

A question on ethnic belonging was absent from the Levada-Center’s questionnaire, but there was a question on the attitudes towards the idea of ‘Russia for Russians’ based on which respondents can be divided into three groups: Those who think that in Russia should live exclusively ‘Russians’, or that they should have a privileged position; those who think that Russia is a multi-ethnic country in which all should have equal rights; and those uninterested in the aforementioned ideas.  The respondents in favour of one type or another of ethnic discrimination in favour of the Russian majority, (total) often attributed negative characteristics to Ukrainians, and dominated on positive (self) perception.  On the contrary, respondents who thought that all in Russia should have equal rights regardless of ethnic belonging often attributed positive characteristics to Ukrainians, and predominated in negative [self] perception (Findings were similar among respondents neutral to this idea).

IN YOUR OPINION, WHICH OF THE FOLLOWING QUALITIES MOST CHARACTERISES UKRAINANS (OF RESIDENTS OF UKRAINE)? (Levada-Center Data)

The ANO Levada Center has been forcibly included in the registry of non-commercial organizations acting as foreign agents. Read the Director of the Levada Center’s statement of disagreement with this decision here.